Belgian citizens often use websites of the Belgian administration, such as Tax-on-web to complete their tax form (about 2,4 million users did so last year (Belga, 2014)) or open a case with the Belgian Privacy Commission through e-loket. People appear to be using these services increasingly (Belga, 2014; European Commission, 2013), and personally I certainly applaud this increased popularity of e-government.

However, a government should always take care of its citizens, certainly when it comes to sensitive data. And two recent news items made me decide to check on the current status of SSL certificates used on web properties of Belgian authorities. In January, Yeri Tiete checked the certificates of Belgian banks. About a month later, his blog post was noticed by national (and international) media and was discussed intensely. This attention was ultimately a blessing for the customers, because banks actually acted and made efforts short after to better secure their websites. But, while people can quite easily change to another bank, there is only just one federal government! So I think it is even more interesting to check on how they are doing. Apparently, people use public Wi-Fi networks for filing their taxes and this becomes an issue when the login page doesn’t automatically redirect the user to the secure HTTPS variant (White, 2015).

Admittedly, there is a lot more to consider when looking at a website’s overall security. However, a limitation of this blog post is that I will only look at the strength of the SSL certificate. The strength of a certificate is determined by Qualys‘ SSL Labs Server Test. Each certificate then gets a score ranging from A (best) to F (worst). Some things to consider:

Here is the data and the scores for each service:

A lot of services offered by the Belgian government are handled by the central login domain login.socialsecurity.be and is included only once. Here is the list of domains analysed: 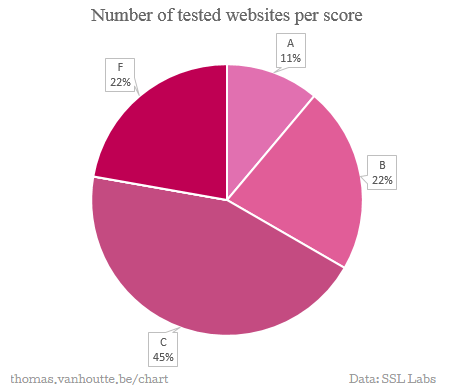 Some extra remarks regarding the ratings, per domain:

Too many users are potentially exposed to the POODLE vulnerability. Not sure how this is still possible since it was discovered in October of 2014 already. Also, of all the domains I tested, HSTS (Lackey, 2015) was never enabled. If you are not familiar with what HSTS is, in short, it means the website will serve its contents only over HTTPS and not over plain HTTP. While the user was always redirected to the secure page on login pages, HSTS would still be a nice addition to secure the whole domain.

Some vulnerabilities or weaknesses found will solve themselves as times goes by. The use of SHA 1 is one such example: when a current certificate is due to be renewed, the certificate authority will (very likely at least) not offer SHA 1, but only SHA 2. Additionally, browsers will start to complain, such as Google Chrome, which will warn “This site is using outdated security settings“.

Do you have other domains of the federal government that needs to be checked and compared? Or you want a new blog pots for another government (e.g. Flemish government)? Please let me know in the comments.