You have worked many months to complete your thesis or academic paper and you have relied on existing knowledge to finalize your research. Now you want to make your work available to the public. Here is how to properly include your academic research (journal article, thesis, book, ) in the Google Scholar search engine.

First, you want to create a Google Scholar profile. Go to scholar.google.com and in the top, choose ‘my citations‘ (

). If you were not yet logged in into your Google account, you will have to do so now.

From this page, you can create your Google Scholar profile page. Include as much information as possible, such as a profile picture, your website, affiliation and areas of interest. I would also recommend you to make your profile public.

Once your profile looks good, we can move on to actually adding your academic writings. From here on, you have two options:

Option 1 – Adding one by one

If you only want to include one document (let’s say, your master’s thesis), you can do so manually. Here are the steps:

Click save and if you filled in everything correctly, you will see the message ‘Added article to your profile’. Congratulations!

In case you have an academic career and you have a list of work on your (academic or personal) website, option 2 is more suitable for you.

Google has guidelines to help you index your website that contains your academic work. Here are the steps you should follow to successfully include all of your work at once:

click submit and you are greeted with this message

Thanks for submitting your website to Google Scholar. Our crawl team is working hard to add new content as quickly as possible, and we appreciate your assistance.

Please keep in mind that bibliographic data is extracted from your pages by automatic software. If you aren’t satisfied with the accuracy of your listings, please refer to our technical guidelines at http://scholar.google.com/intl/en/scholar/inclusion.html for ways to provide more accurate bibliographic data.

An email detailing your submission has been sent to [email protected]

If your content meets our guidelines, you can generally expect to find it included within the Google Scholar results within 4-6 weeks.

Be patient, because as the message says, it can take up to a month or more before your articles are indexed. You will also receive an e-mail from [email protected] with the data you just submitted.

Here is a great tip: follow your own Google Scholar profile!

Go to your own profile and at the top right, choose ‘follow’. Enter your e-mail and create the alert. If Google adds a new article to your profile, or a new citation, you will receive an e-mail alert. 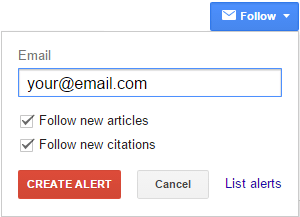 This is an excellent way to receive a heads up if another researcher or student has cited your work in their academic writings. Maybe you can even reach out to the author(s) and talk about their research; a great way to expand your network.